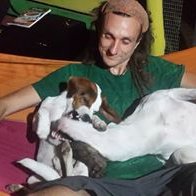 Since I was 20 years old I have been traveling in North America, Canada, forest to forest. I lived outside 4 seasons, winters included, I would move every season, build my camp, harvest the resources around, make some money in the nearby farms, play music, sell what I harvest from nature, mostly mushrooms, etc... So i have been living in the forest since then, also in communities, i was in the same one in the deep forest of northern Quebec, Canada with 14 other rainbow brothers and sisters among the local first nation the Algonquinns for 2 years. Also, have been dedicating my life to the fruitarian community project, started in France, just an idea, to all the adventures that lead me to Canary islands, then Kenya, then back to Canada, and now on i'm in Costa-Rica and Canada since 2013.... Lots of experiences, in permaculture, community building, gardening, and many many other essential things for the creation of the raw-vegan community. There has been many people involved in this project, traveling with me for months, sometimes years! many whom where fully dedicated. Most of them left, due mostly to difference in vision.
I have also lived the intoxicated life of most civilized people on earth until april 2010; high hormone, high protein, high fat, etc... And like most civilized kid, I also grew up alone (I was lucky enough to have a "typical" middle class loving family, i love my family deeply), watching television, going to school and always surrounded with strangers, without a real community.
The life of a civilized white boy has put me on this straight path of healing and community living, unity for harmony with people and nature.