Ever made raw almond milk at home in your blender? It's surprisingly easy as long as you have a blender and a nut milk bag. 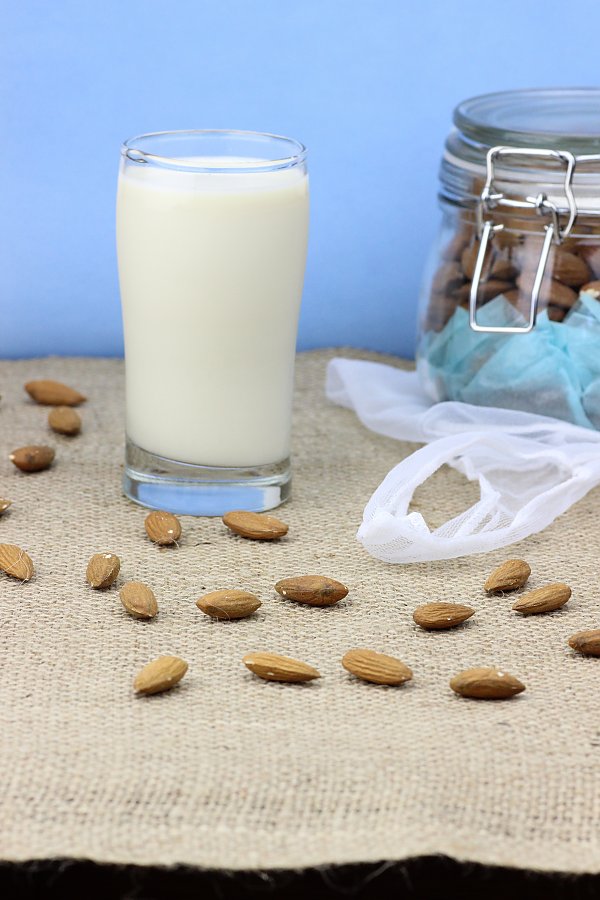 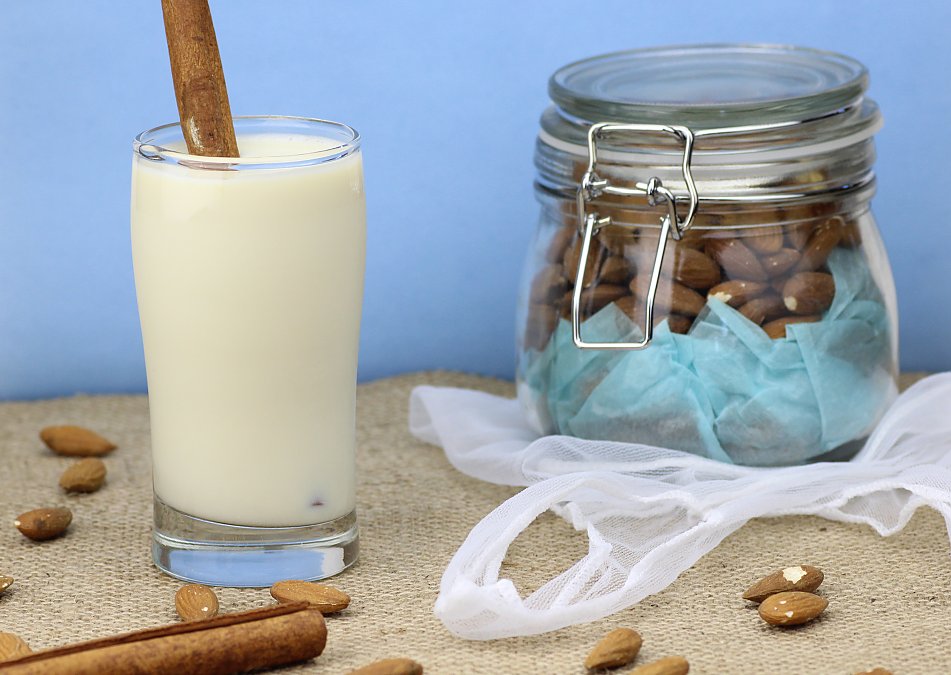 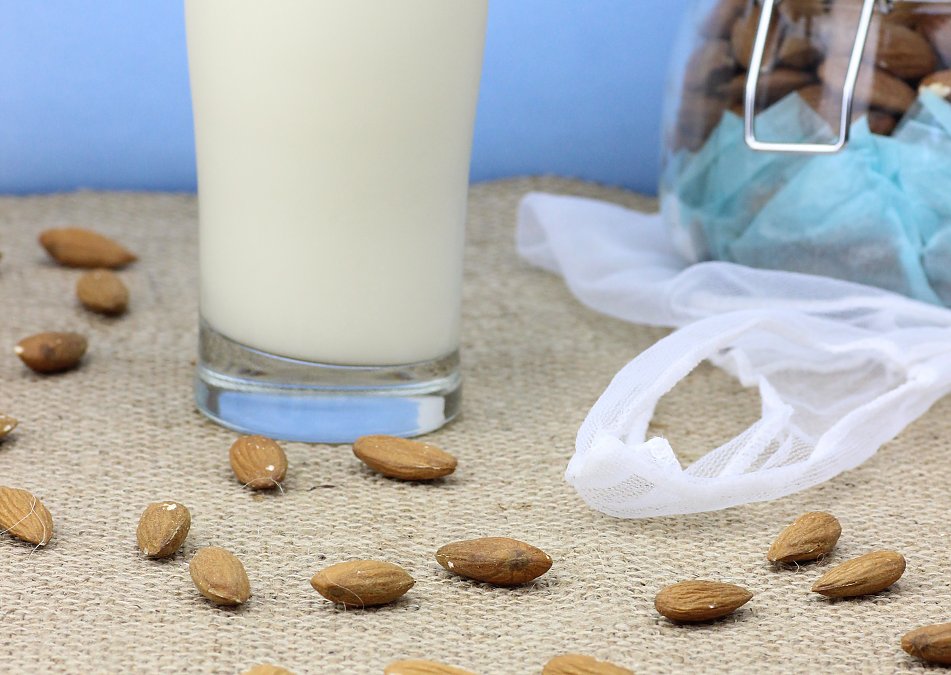 I used to be terrified of making raw almond milk recipes.  Instead, I made cashew milk as an alternative because raw cashew milk seemed easier since no straining was required.

However, now that I'm more price-conscious with my grocery bill, I've decided to make the switch from cashew milk to almond milk since almonds are much less expensive.  And now I'm wondering why I didn't make the switch sooner!

For me, the thought of "straining" with a nut milk bag was overwhelming. And a lot of almond milk instructions seem to be overly complex and way too detailed. However, it's really just a 2-step process: blend and strain!

I hope that you find my pared down instructions on how to make a basic raw almond milk recipe helpful.

Raw almond milk can be stored in the fridge for a few days (3-4) in a sealed container. It might separate. Just shake or stir and it'll look normal again. If it smells funky, throw it out. If you need to use it up before it goes bad, add it to a smoothie.

Yes!! Because I am cheap I thought I could Just use cheesecloth - which is super thin mesh material. However, it was a total disaster and basically didn't work because it was impossible to handle since the cheesecloth gets clogged up immediately and there is nowhere for the pulp to go. Thus, you need a nut-milk bag, which is basically similar to cheesecloth but because it is shaped like a sac it can hold all the excess pulp.

After the vitamix, put the pulp through a juicer - this gets most of the juice out and can save the need for a nut bag :). also coconut milk is amazing - just use the meat from brown coconuts with water - amazing!

Hi Christina, I bought mine locally, but here is a very similar nylon nut milk bag that I recommend: http://tinyurl.com/b5vocdj

If you hang the bag full of the pulp and milk (after blending) on a cupboard handle over a bowl, it will be easier to strain after like 5 minutes, let gravity do some of the work! I halve this recipe and it turns out great, the full recipe is too much liquid for my blender, plus after a few days the milk doesn't taste so good. Thanks Rawtarian!

Sharing comments and tips like this one make this place so useful for US ALL!

What do we do with all the leftover almond bits that we strained out?

1. Throw it out because it's not really very tasty OR
2. Use the "almond pulp" in an "almond pulp" recipe (this is my fave: https://www.therawtarian.com/raw-almond-pulp-fudge - it's really tasty!!!!!) OR
3. Freeze the almond pulp in a ziploc bag to make an almond pulp recipe in future

I hope this helps!

I always soak my almonds, and peel the skins off before making milk. it's way better
if you soak the nuts.

Agreed that it is better if doing so, but it will still turn out if you want to skip this step :)

Quick and dirty, that's my motto :)

I always make my almond milk with adding one date (while straining), and then a dash of vanilla powder, and a pinch of Himalaya salt to give spark to the vanilla taste. Try it! The recepie is still easy to make.

I soak the almonds overnight, in warm water with a pinch of salt. The next morning dump the almonds into a mesh strainer & rinse them well under running water. I then bring enough water to cover the almonds to a boil in a small pot. When water starts boiling dump it on rinsed almonds & let the almonds soak for 90 seconds. Dump the water out, reserving the almonds, then rinse under cold running water. You can then easily slip the skins off the almonds. Put the almonds & water in your blender & blend. You will have a creamy milk that doesn't need to be strained. It sounds a lot more complicated than it actually is.

Thanks for sharing that, Susan. Sounds delicious and not that difficult!

I plan to try your recipe next week because it seems so easy! I think I am going to soak my almonds overnight. Any tips? I am a first timer. Also, where can I find a nut sack? Thanks!

Hi Danielle! Let me know how it turns out! Soaking is not necessary but you can if you like. Nut bags are available on Amazon, or at your local health store, maybe? :) I've included a nut bag link in the post, check it out!

Mhmm! The milk turned out great. It was so easy too! Great in smoothies & coffee! I'm use to the store bought light vanilla silk almond milk so it wasn't as sweet as I was use to but I a little bit of vanilla. Any other tips in what I could add to make it a tad bit sweeter? I also to plan to make the easy almond pulp cookies with the leftover pulp! Thanks again!

Hi Danielle, you could try adding more dates, or some maple syrup. :)

Whoops sorry that's me that commented above, forgot to log in!

I have a SS mesh strainer used for making Greek yogurt, will that substitute for the milk bag?

depends on how thick the strainer is! If it catches fine particles you'll be good to go

I've been making almond milk for quite some time with a Blendtec blender with their "Twister" jar (intended for smaller quantities). This blender so completely pulverizes the almonds that straining really isn't necessary (the Vitamix blender is the only other blender on the market that will perform this well).

I use a higher ratio of almonds to water and get a product that is real creamy, and just the right addition to cereal in the morning. Here's the process I use:

1. Put 2/3 c of raw almonds in the blender jar. Put on the jar top and pulse a number of times until fairly evenly powdered, then blend at high speed until the contents start to turn to a paste.
2. Add 1 ½ cups of water and ice, and a little bit of vanilla. Make sure the top is fully seated, or it may come off during blending - believe me, it makes a mess. Blend, starting at mid speed, and increase the speed every five or six seconds until it is at high speed. My Blendtec has a smoothie cycle which does a perfect job and takes about forty seconds.

I use my Vitamix all the time for almond milk, without straining, and it's wonderful!

It does work, but it's gritty/pulpy.

Hi. I recently made my almon milk and it tastes rancid. Is it likely to be stale nuts? If so how do I protect against this?

Hi Trish! Real fresh nut milk doesn’t last in fridge for very long – 3 days maybe.
Also, if soaking nuts, soak them in the fridge and not on counter!

Regarding almonds being cheaper than cashews, that depends on where you buy them from. I found a fantastic company (Terrasoul) with fantastic products. Their cashews are less expensive than their almonds. However, they are both raw and organic. Further, their almonds are sourced from Spain, providing at least 2 benefits: (1) they are unpasteurized, and (2) they don't add to the worsening water problem in California. Of course, the downside is the environmental impact of importing them from farther away (for those who live farther away from Spain than from California).