A Community Recipe by Earthintruder 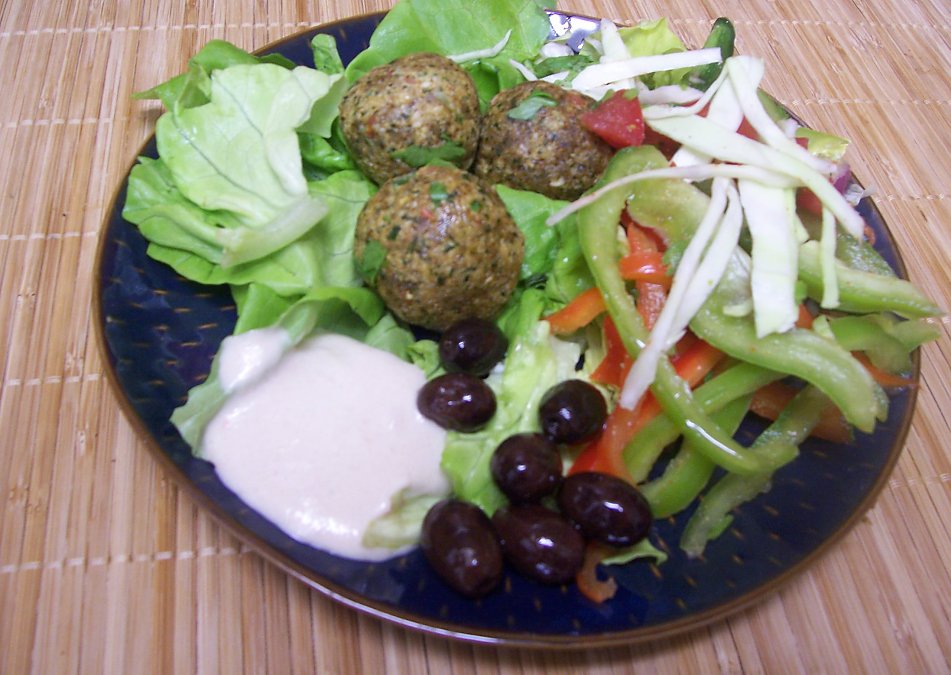 Click on photo above to open gallery
This recipe is so fast and easy! Throw these balls on a salad or in a collard as a wrap! I like to put these in a large collard leaf and stuff it with raw olives, cucumber, red onion, tomatoes, shredded carrots, and beets. Then top it off with tahini dressing mixed with dill and lemon. It's so delicious and yummy!
Add to your favorites
Found in:

1. In a blender, grind first the sunflower seeds into fine powder. Soaking these seeds would be best, but you don’t have to.

2. Add in all the other ingredients (I sometimes add bell pepper, carrots, or just whatever I have on hand).

This recipe is so fast and easy!

Throw these balls on a salad or in a collard as a wrap!

I like to put these in a large collard leaf and stuff it with raw olives, cucumber, red onion, tomatoes, shredded carrots, and beets. Then top it off with tahini dressing mixed with dill and lemon.

It's so delicious and yummy!

Has anyone ever tried these with sprouted chickpeas instead of sunflower seeds? I am guessing that would taste authentic since cooked falafels are usually made with garbanzos.

This is a great recipe! I've made this several times this year, and it's always terrific.

these are SO GOOD!!!! :9 i used mostly sunflower seeds, and some sprouted buckwheat too.

Hello everyone, I wish to share my testimonies with the general public about Dr Kachi for helping me to win the LOTTO MAX, i have been playing all types of lottery for the past 9years now. the only big money i have ever win was $3000 ever since things became worse to enduring because i couldn’t been able to win again, i was not happy i need help to win the lottery, until the day i was reading a newspaper online which so many people has talked good things about best lottery cast Dr Kachi who can change your life into riches. So I contacted him and he cast the spell and gave me the hot figures. I played the LOTTO MAX DRAW Behold when I went to check and to my greatest surprise my name came out as one of the winners. I won $60 Millions Dr Kachi, your spell made it wonderful to win the lottery. I can't believe it. Thank you so much sir for dedicating your time to cast the Lottery spell for me. I am eternally grateful for the lottery spell winning Dr Kachi did for me. I’m now out of debts and experiencing the most amazing good life of the lottery after I won a huge amount of money. I am more excited now than I ever have been in my life. In case you also need him to help you win, you can contact: drkachispellcast@gmail.com OR Call/WhatsApp number: +1 (209) 893-8075 Visit his Website, https://drkachispellcast.wixsite.com/my-site

This is a great recipe! I've made this several times this year, and it's always terrific.

I'm a newbie raw foodist and I found these doing a search for a falafel recipe--I can't believe I hadn't considered NOT dehydrating the falafels before I saw this! These were SO good! I did the whole thing in a food processor--I used raw pepitas instead of sunflowers seeds and parsley+dill instead of the fresh coriander. I added more cumin and a bit of ground coriander seed. I processed them until they still had a bit of texture and served them as recommended (in a collard leaf with tomatoes and a fresh raw tahini-lemon-dill sauce then sprinkled with paprika). SCRUMPTIOUS! Thanks for helping a new raw foodist out!!!!

Wow! I made these last night and they are great... so easy too!

Thanks a bunch for posting this recipe!

Yum, these are so yummy! I made them for lunch today to go with my salad (these I will use as my croutons that I've been avoiding - oh how I missed them!). I added some red bell pepper and half a carrot (I halved the recipe because I'm the only one who'll eat them). Actually even with half the recipe I ended up with too many (there were still 10? maybe I made them too small), so I cough-froze them-cough for later so I can just grab some and take them to work with me.

Thanks Earthintruder for the great recipe!

Fresh coriander is essential in this dish. It bring out the flavor. I used half of the recommended amount of sunflower seeds, and the results were fantastic. Also, I used green onion instead of onion. Serve with tomatoes and basil on a bed of lettuce with tahini dressing.

Wait - Is that fresh coriander? How much if I'm using dried?

Wow! I have never had cooked falafel, so I won't have that to compare, but I have been to a raw food restaurant owned by a Lebanese man, and his falafel (which he puts in salads) is great. In fact, it's the only thing at the restaurant that my son will eat - he just wants to pick the falafel pieces out of my salads. I'll have to try this one! Your idea of the wrap with all the veggies sounds perfect!

yummy in my primate tummy

these were really delicious and super easy!

Love the idea of a quick and easy raw food recipe. Looking forward to trying it.

Fantastic! I made the falafels according to recipe - except I used onion powder instead of onion, and very little garlic. I used a very generous squeeze of lemon. The cilantro adds great flavor. I reccommend topping this with tahini dressing and popping them into large boston lettuce leaves with tomatoes. Thanks a million, earth intruder!

These are delicious....eating them right now! Threw them on top of a toss salad with Chickory, red leaf lettuce and spinach and then topped them with a yummy lemon tahini dressing from this site.

The dehydrator did a fine job of fixing the texture! I made a tzaziki (sp?) sauce, with tahini thinned out with almond milk, dill, finely chopped cucumber and garlic, rolled the falafel in a big romaine leaf with onions and red pepper. YUM!

Oh yum! Since my blender is so tiny and crappy, I had to do just the seeds, and then the other things, and then mix them together in a bowl. They turned out great (although not like the picture--they were green...like everything else i "cook"). Thanks for the recipe!

wow these are so yummy. Mine didn't come out like the picture. Mine were a little bit softer almost like a thick hummus but it is delicious. I added a little water to mine too so I'm sure that's why. Maybe it would blend better in a larger quantity. (I halved the recipe) I also forgot to put the tahini in and added a little extra lemon juice.

I'm afraid I've done something terribly wrong! The ingredients wouldn't blend in the Vita Mix so I added a little water--and then a little more--and it still didn't blend. I moved it to a food processor and wound up with a gi-normous ball of pastey goo. Tasty-pastey, but goo nonetheless! I made the balls and rolled them in finely ground flax seed and have them in the dehydrator to see if I can somehow revive the texture. Any thoughts/ideas appreciated...

these are SO GOOD!!!! :9 i used mostly sunflower seeds, and some sprouted buckwheat too.

Thanks for the great recipe! I'm looking for good raw recipes to make for my cooked-omni-eating partner and my cooked-veggie-eating kiddo and I think this fits the bill. I'm going to make these with the cauliflower couscous for supper tomorrow night. Thanks again! (P.S. Where'd you find the raw tahini? Whole foods, maybe?)

I just made this. I used soaked and sprouted sunflower seeds with success. Then I used green lettuce, cabbage, cukes, carrots, olives and drizzled tahini sauce.

Very refreshing and tasty! Thanks for the recipe.

ok so i just made this... and basically. i dont think it ended up doey enough to be made into balls. but i put it into a container and i'm letting it fridge for a while. i think it will be a nice bell pepper fill. nut spread or whatever

i added a bunch of stuff and kinda just went nuts :)

a bunch of parsley

half a glove of garlic

a dash of salt

a few pieces of greek oregano

and its WONDERFULLLLLLLLLLL and very nutty, very nice and spicey. i am lebanese and syrian and i love this heavy spiced mix

Has anyone ever tried these with sprouted chickpeas instead of sunflower seeds? I am guessing that would taste authentic since cooked falafels are usually made with garbanzos.

i used both sunflower and pumpkin seeds. Very good, a little sticky but heavily flavored and very filling.

everyones twist on the recipe sounds delicious! thanks foR the love!