A Community Recipe by Mygreenmojo 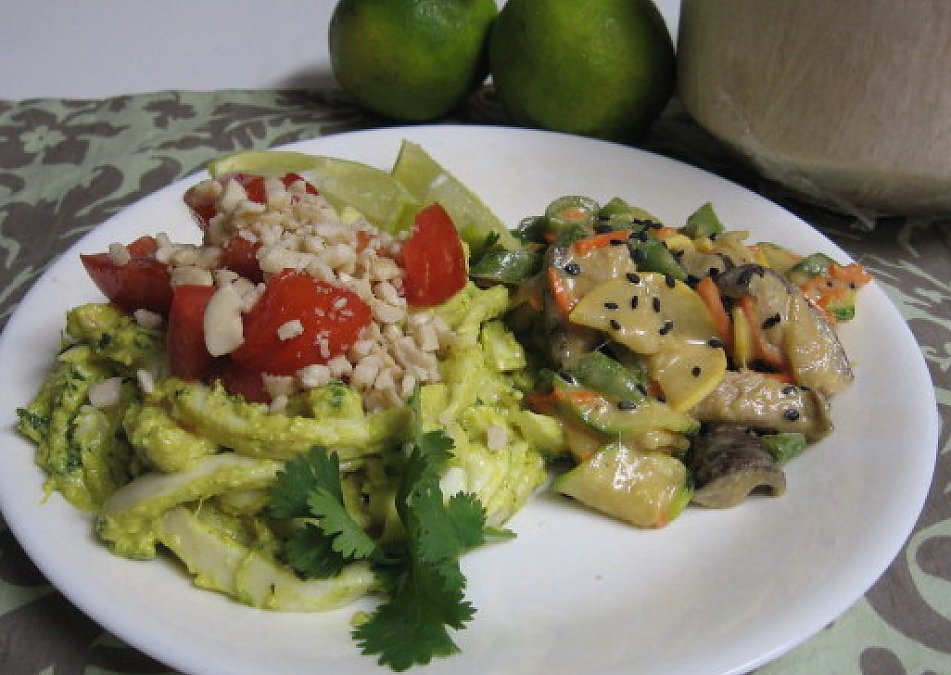 Click on photo above to open gallery
I adapted this recipe from the book “Raw Food, Real World”. It has very intense, fresh flavors and is actually very filling. I guess this would technically be two recipes, but they go very well together as a meal so I thought I should post them together. Don’t be intimidated by the long list of ingredients, it...
Add to your favorites
Found in:

2. Mix together the sliced green onion and all the thinly sliced vegetables in a large bowl.

3. Add the plum sauce to the vegetables and toss to coat. Garnish with the sesame seeds.

4. Cover and set aside to marinate for 1-4 hours, or up to one day in the refrigerator.

5. In a blender, puree the grated lemongrass (you can just chop it if you have a Vita-Mix), coconut meat, soaked cashews, lime juice, hot peppers, green onions, ginger, basil, curry powder, and salt. You might have to scrape the blender down a couple times. While blending, slowly add the coconut water until a thick-sauce consistency is achieved. Then add the cilantro and just pulse a few times to combine.

6. Place the coconut noodles in a large bowl. Add the curry sauce and toss to combine. Mix together the dry cashews, sesame oil, and salt.

7. Serve coconut noodles topped with chopped tomatoes and a generous sprinkle of cashews. Squeeze the lime over the noodles right before eating.

8. Serve with the pickled vegetables.

I adapted this recipe from the book “Raw Food, Real World”. It has very intense, fresh flavors and is actually very filling.

I guess this would technically be two recipes, but they go very well together as a meal so I thought I should post them together.

Don’t be intimidated by the long list of ingredients, it really didn’t take me that long to make.

Probably getting all the coconut meat would be the longest part, but I happened to have a bunch handy in the freezer.

It’s a good idea to buy young coconuts by the case and open a bunch at once, then you can freeze the meat and simply thaw when you need it.

This keeps well in the refrigerator and actually tastes better once the flavors have had a day to combine.

My note about coconuts:

Most any Asian food store should sell young Thai coconuts, and if you ask, they should have cases available. The Asian food store I shop at has been ordering an extra case each week just for me! =) By the way, a case has 9 coconuts in it and should cost around $15.

Also, I guess I should explain in case anyone is totally unfamiliar: how to open young coconuts!

Some people whack them with a big cleaver, but that kind of scares me. mM way ensures I retain all my fingers!

How to open young coconuts: First, lay your coconut on its side in a large bowl. The coconut will have one end that is cut to a pointed cone, this is the end that you cut off.

Start about one or one and a half inches up from the base of the cone and cut a dent with a large chefs knife.

Next, hold the knife upright with the knife point in the dent. With your other hand, use a hammer and carefully tap the end of the knife handle. About 4 or 5 good taps and you should be all the way in.

Next, while holding the coconut firmly and rotating it as you go, press the knife handle down to cut the cone off. This will open the coconut and spill the coconut water, hence the bowl.

Occasionally you will get an especially hard coconut that will require hammering with the knife in 3 or 4 places around the cone, but luckily most are pretty easy to open.

Strain and drink the coconut water, or use for smoothies, etc.

Then, using the back of a spoon, carefully separate the coconut meat from the shell. You will probably have some little bits of brown wood stuck to the meat.

I’ve found that it’s easiest to pick/rinse these off while holding the meat in a small bowl of water.

Once your meat is clean you can use it right away or freeze it in 1 cup portions for later use. You may even want to cut some into noodles if you know that’s what you’ll be using it for later.

One coconut will yield up to one cup of good coconut meat, but some may only yield half a cup so it’s always good to buy a few extra.

Sometimes you may get a few very young coconuts with very thin, soft meat.

It can help to let the rest of the case sit at room temperature for a few days to let the meat thicken a bit.

And that’s about it. If you can’t tell by now… I am madly in love with coconuts! =)

ugh i wish i liked coconut water! I guess i'm still not very used to coconuts... how do you get the meat out of a young coconut? mmm i've been craving thai curry so i'm really wanting to try this one!

Thank you for all the information... It is so nice to get thorough information... You covered it all... I appreciate that....I am going to try these recipes out and check into getting some coconuts, maybe down in china town... they may sell them by the case... I know they are about $2 - $4 here.... I am in Victoria, BC, Vancouver Island, Canada.

Oh, if only young coconuts were not over $4 each here...Sigh.

Zhanna8, thanks for the suggestion to make coconut kefir, I'll definetly try that! Oh, also, a midnight snack discovery! ...the pickled vegetables are AMAZING stuffed in a nori hand roll! You've gotta try it.

oh oops, i should have read the whole thing before i commented lol

ugh i wish i liked coconut water! I guess i'm still not very used to coconuts... how do you get the meat out of a young coconut? mmm i've been craving thai curry so i'm really wanting to try this one!

at some point everyone get to the 'coconut' stage... then you get your skills in opening it and utilizing it for practically everything. this is when you open frige and all you see is coconut!

in LA area we are so lucky to have distributers selling 9 for $4.

I just freeze the coconut water and I used it in shakes, smoothies, ice cream, etc...

Katie, I try to drink as much as I can all day. And I usually make some recipes that use coconut water, like the Thai Curry Soup recipe. Then I just try to get my roommate and anyone else who is around to drink it! lol I've actually given it to my pet parrots, they love it!

When you open the coconuts to freeze the meat, what do you do with all that coconut water? I love to drink it but I an only have so much at once, lol. I wouldn't think it would be good to freeze it because I thought it quickly lost its beneficial qualities once it was opened, but I'm not sure.