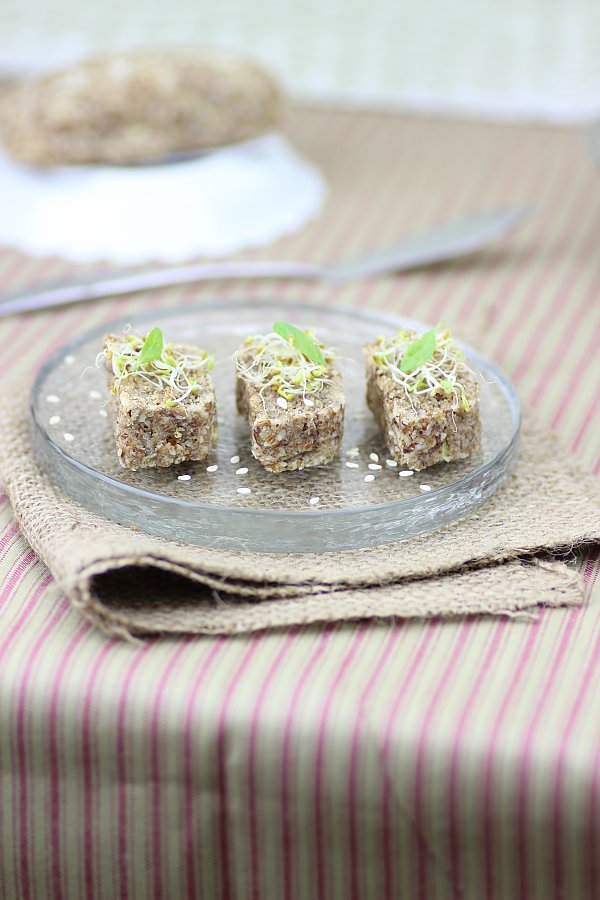 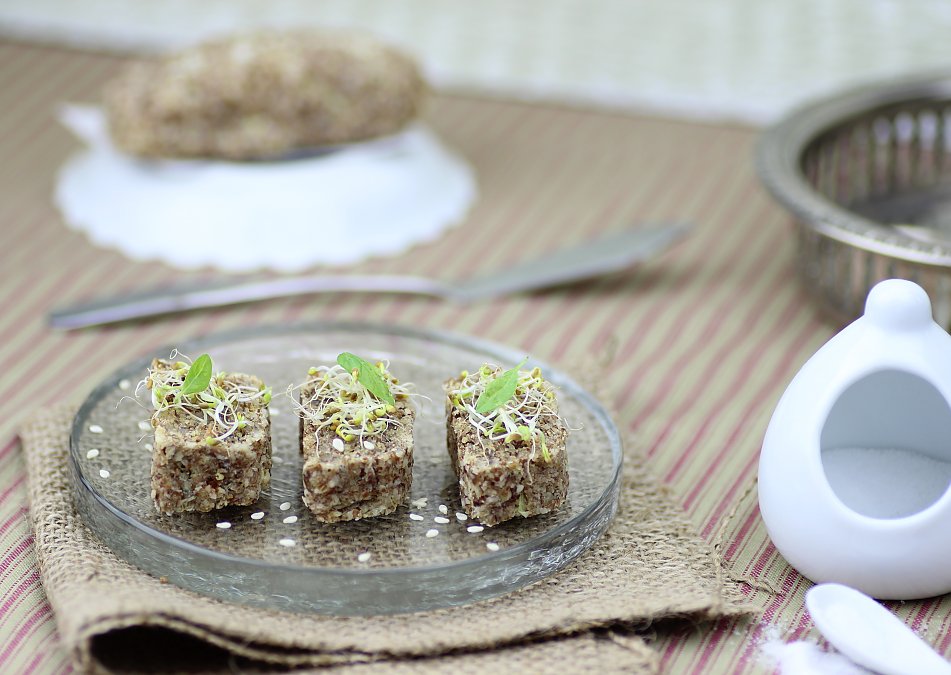 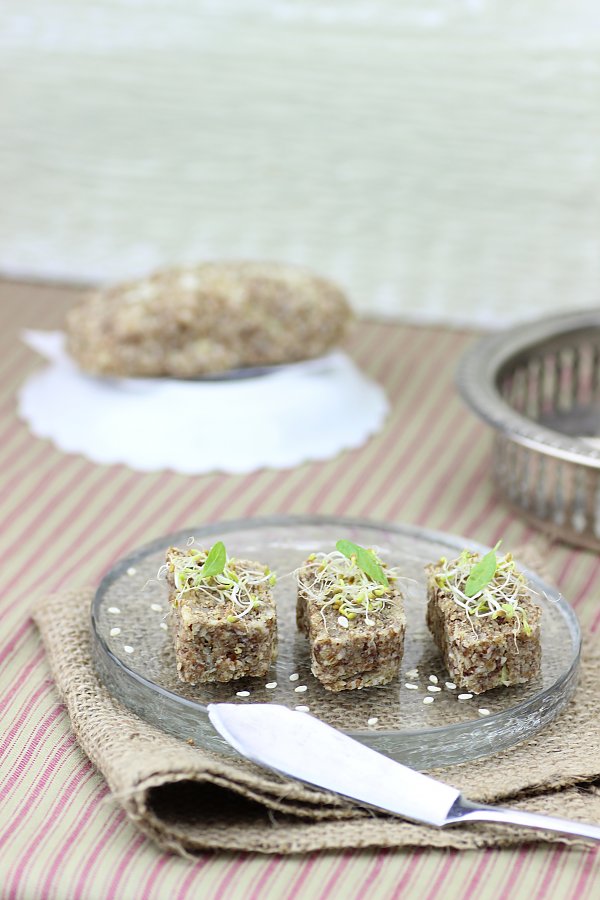 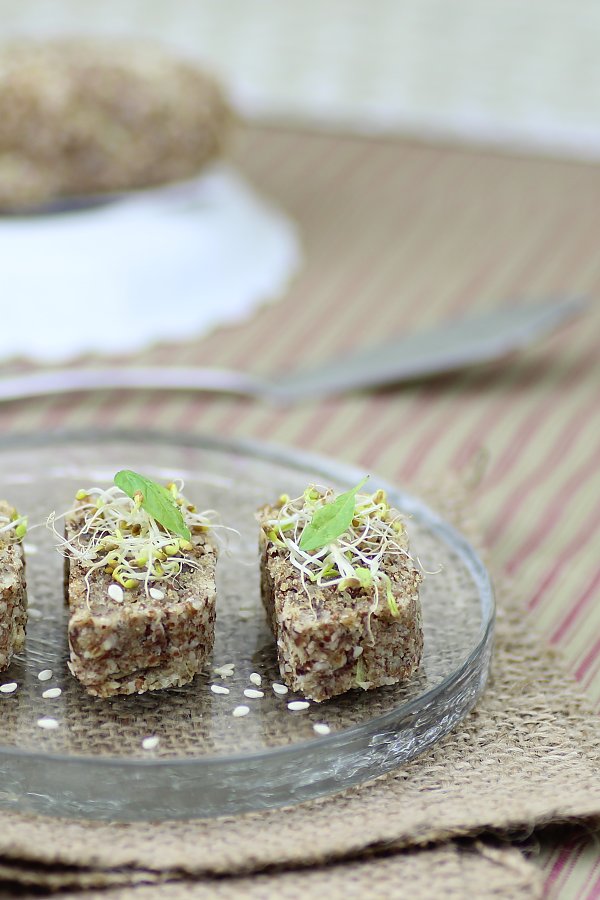 Thanks for sharing your recipe.
I made a version with ground sunflower seeds and an amount of flaxseed meal twice that of sunflower seeds to make the omega-3 greater than omega-6. I used twice the water. I added a couple tablespoons of sourdough starter and active dry yeast and let the dough sit covered (anaerobic) for 3 hours to ferment the seeds and grains a little which should have made the nutrients more bioavailable (and beneficial LAB handles the harmful bacteria). Fermenting up to 6 hours is probably better. Dehydrated the dough for 30 min at 95F then 10 hours at 113F. Healthy tasty moist bread - thanks again!

I sure do! It looks like most of my raw vegan wrap recipes are locked up in my members-only area (www.therawtarian.com/getTRK) and there's also a really good flax wrap recipe in my paper cookbook, Cook Lively, on pg. 122.

But that doesn't really help you now, does it.... I will email you a thing :) xoxox

Forgot to say I added a couple tablespoons of applesauce too to feed the yeast and LAB cultures more.

I love this recipe! I use it with almond pulp leftover from making almond milk. I either dehydrate it and make it into flour and use it pretty much the same as almonds or just use it wet and don't add the water called for in the recipe. Great for avocado sandwiches! The sky's the limit! Thank you Rawtarian! And now to make my all time fav - Raw Tuna Salad Recipe!!!! xoxo

I'm so glad that you find this bread recipe useful, Rosalyn! Yes to using it with avocado ... Yumm!!

And thanks for your sharing your excellent tips with us. It's comments like yours that make this place the useful hub that it is!

No idea what has happened but these were vile. I used zucchini instead of onion. All I could taste was the husks. I take the husks daily in water and they are horrible but I assumed they would taste different here. The texture was awful too.
I used weights not cups.
I’m not trying again.
Sorry, Helen x

Ahhhh....so much confusion over psyllium, whether to use whole or ground and so on.
The beauty of using metrics and weighing the psyllium in grams means it doesn’t matter what volume the psyllium takes up. The density is irrelevant. You will always get it right, whether using powdered or flakey or whatever.
Thank so much for adding in metrics. It is much appreciated.
Love and hugs! xx

Love it! Delicious & moist! Blown away! Every mouthful is filled with taste! I used almonds pulp dehydrated instead of raw almonds and it was still great!: Very filling. I may tweak it next time and add more onions and some sundries tomatoes!!! Thx so much!

I'm so glad that the bread turned out well for you, Cfenner!

Surprisingly had everything in the pantry and fridge, even the psyillum husk. So I used leftover almonds from my almond milk making. Dehydrated the meat and thrown in the blender so ready made flour. The loaves came together beautifully - dehydrating as I type...used zucchinni for half of the onion added fresh rosemary, oregano and thyme for an herb bread. Can't wait for them to be done. Thanks so much for such an easy recipe. Will try the cookies version as one of your followers suggested.

I love it when that happens: everything in the house already!

Hi, thanks for this recipe. I'm looking forward to trying it but was just wondering if it's possible to freeze some of the bread after making?

Yes, definitely, go ahead and freeze them once they're ready to eat.

To enjoy after, just defrost them for a couple of hours and enjoy. (Or pop them in the dehydrator again until warm.)

Do you have a suggestion for making this raw bread FODMAP friendly so no onion or garlic?

Use shredded zucchini instead of the onions. And omit the garlic :)

Is there a substitute for the psyllium husk? Thank You!

No, sorry, there is no substitute for psyllium husk in this recipe. It's what makes the loaves spongy :)

TY LauraJane! Now that I have the bugs worked out with psyllium husk or powder - this is one of my go to recipes for bread! So nice and savory! I give it to all I can expose to healthy eating and it is very popular! I add some raw soy sauce to give it an even extra savory zest sometimes. NICE! TY again!!

My pleasure, Becky! Thanks for letting me know that you've got the kinks worked out and are enjoying it :)

This sounds good, but I'm a little concerned about the initial temp of 145 - I thought raw food had to be below 110 degrees? Will it still work if I do it at 110, but leave it in longer?

As you know, when dehydrating raw food it is important to keep the enzymes alive by dehydrating at 105 degrees Fahrenheit (40.6 degrees Celsius) or lower.

However, I recommend turning your dehydrator on “high” (145 degrees) for about 1.5 hours when first putting food in the dehydrator, and then decreasing the temperature to 105 degrees after 1.5 hours or so.

I suggest this because the initial warmer temperature will help to take away a lot of the moisture at first, and the thinking is that it takes a while for your dehydrator to climb up to “high” and it also takes quite a while for the food to actually get to the temperature that the dehydrator air is at so it is still safe for raw foodists.

One of the best side-effects of setting your temperature higher at first is that it’s good at getting rid of the initial moisture quite quickly. Increasing the temperature at the beginning of cooking time is common practice in the raw food community. If you are not mindful about turning the heat back down after 1.5 hours, yes, your food will be heated above 105 degrees.

However, this risk is warranted. That initial heat blast can really save you a lot of time and can accelerate the dehydrating process by quite a bit, even by 50% sometimes.

For me, I do strive to live a 100% raw lifestyle; however, I also make some slight tweaks to the “rules” in order to ensure that I can stay raw over the long-term.

Are there any other nuts that I can use with this instead of almonds?