This raw mock tuna pate recipe is perfect for whipping up a quick lunch. Use it to top a salad, stuff inside an apple or make into lettuce or collard wraps. Walnut and cashew base. A food processor is required. 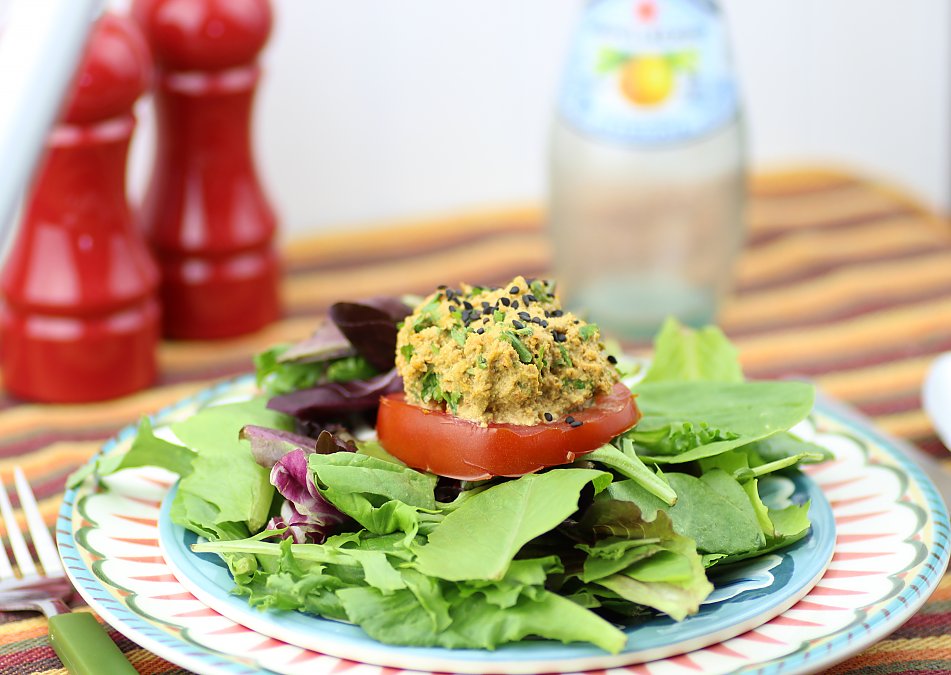 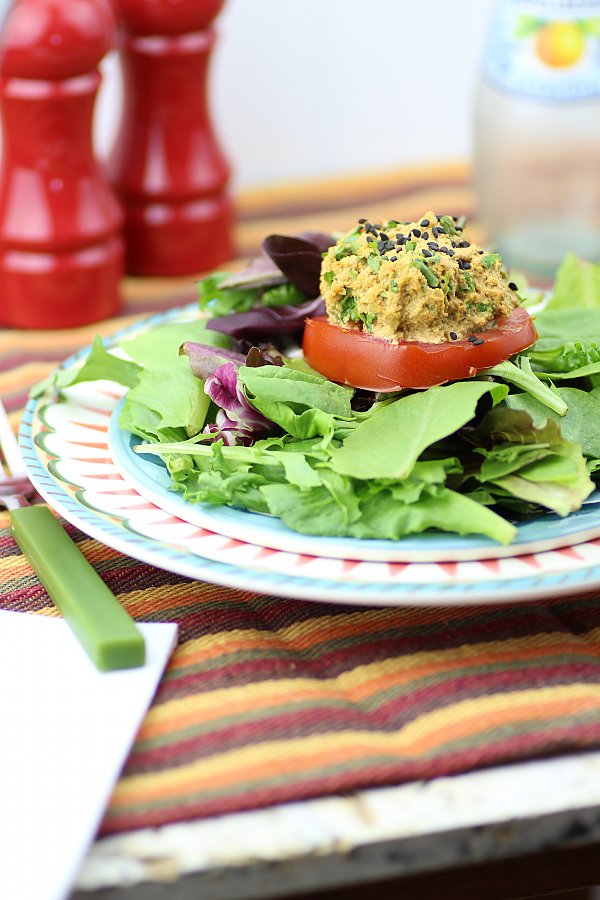 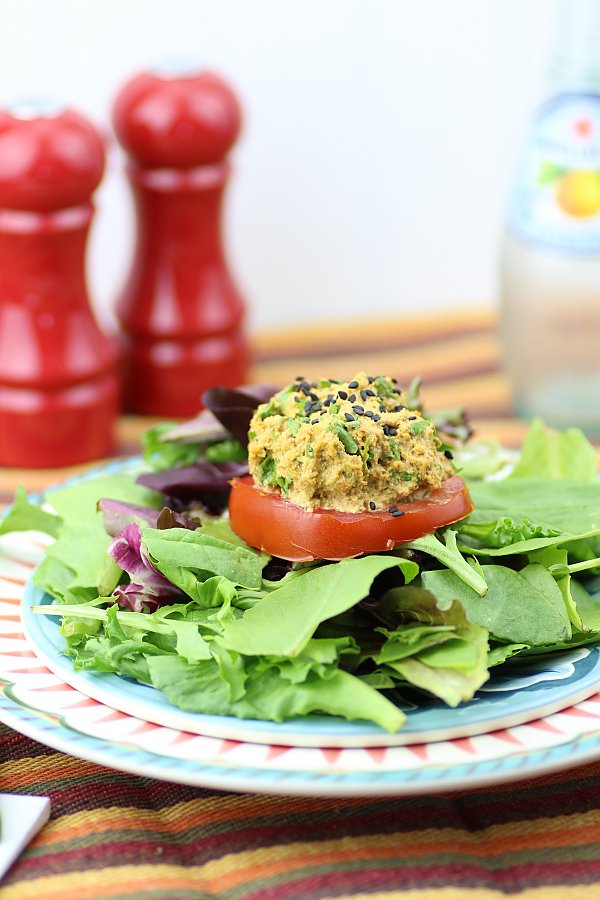 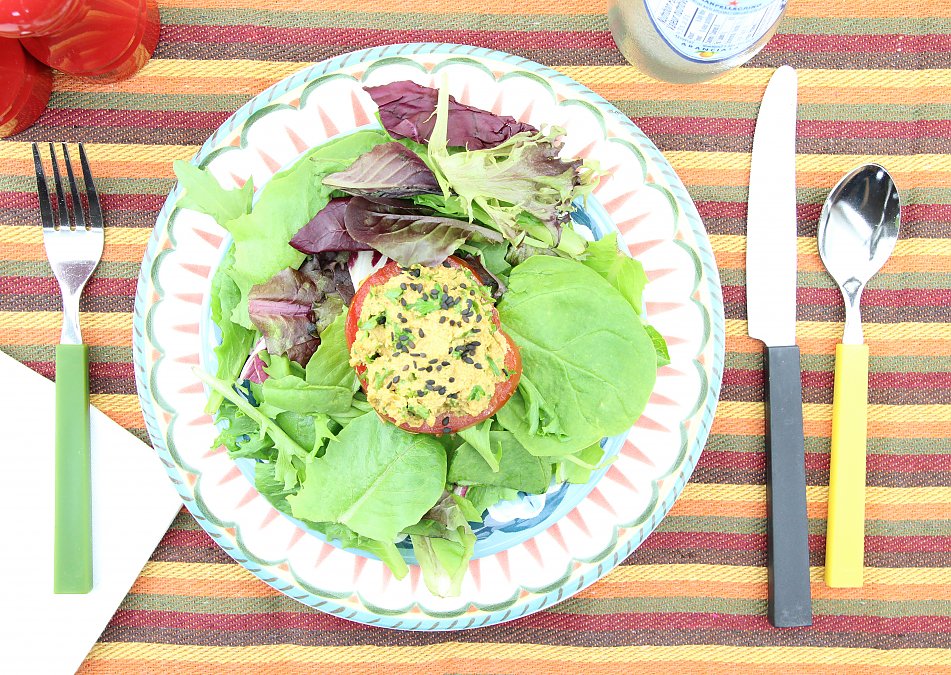 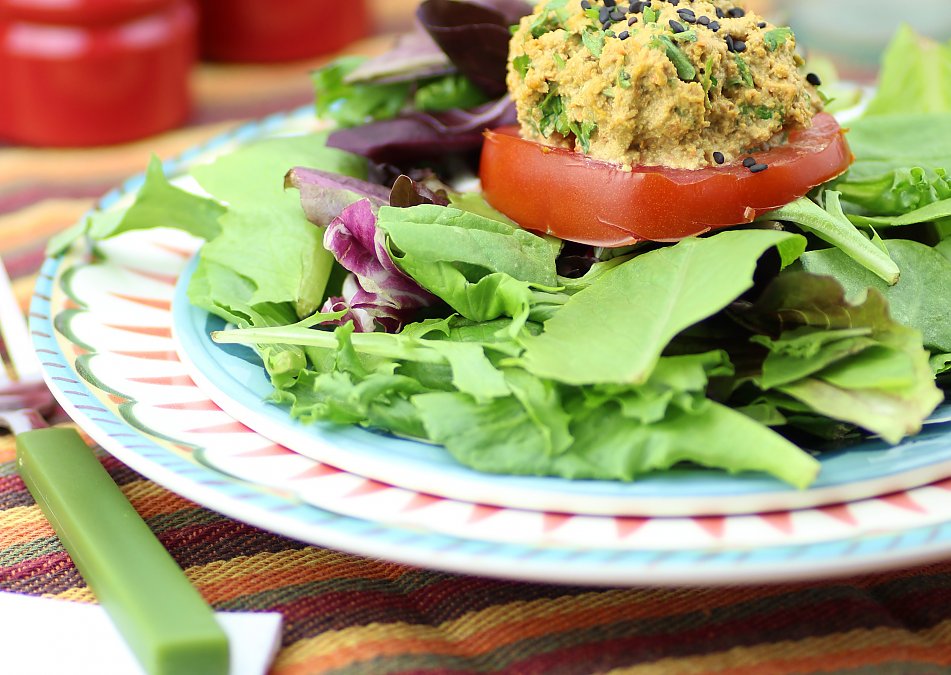 Well, this raw vegan tuna recipe is different. Let me tell you why.

Before I went raw I was a kinda-vegetarian who also ate seafood. My one weakness as a seafood-eating vegetarian was tuna--especially tuna subs from Subway. In fact, tuna subs have been the #1 thing that I miss most about my old standard American diet!

Lately for some reason I have been really craving a tuna sub. Over the past couple of weeks I've spent a long time thinking about what makes the tuna from Subway so darn delicious, and I have finally come up with my raw vegan tuna and mayo combo that I think rivals Subway's tuna recipe.

What I like about this recipe that I've created is that it really tastes like it's got tuna (salty) and mayo (fatty/oily) all rolled up into one creamy, filling spread.

This recipe is pretty heavy and full of lots of fats and salts, from the coconut butter, nuts, Braggs and nutritional yeast. You'll find that you feel quite full after eating just a bit of this raw vegan tuna and mayo combo. Although this raw vegan tuna and mayo concoction is really easy to make, I don't think I'll be making it very often because it is pretty unhealthy--well, unhealthy as far as raw vegan meals go! But it sure is nice to have something I can turn to when I am really craving those tuna subs!

Also note: In this pic I mixed my final "tuna" mixture with some chopped parsley, that's why it has some green flecks in it :)

This sounds soooo delicious, my wife and I will have to try making it! We can't believe it about the eggplant crackers! We seriously thought we invented that idea!! LOL!!! :^D

Hi Laura-Jane,
Your recipe calls for coconut butter. Would it work without it or possibly coconut oil?
Many thanks!

Hi Laura, Woops, I meant to write "coconut oil" not "coconut butter." Just corrected the recipe. So to answer your question, yes, use coconut oil! And thanks for your question, because it brought my mistake to my attention. Thank you! :)

another really good, but very simple recipe for a tuna salad thing is just to grind sesame seeds with lemon and salt, then put that in your vegetables! it's the best thing ever! I use a large mortar and pestle to get it into a paste form with the lemon and salt in there. add water depending on the consistency you want. with the sesame paste, i don't even add any spices or anything, just mix it in with grated sweet veggies(beets, carrots, jicama, seet pepper, etc.) then plop it in a cabbage leaf. it's the bomb!

Wow! I don't miss Mayo with this recipe. It has a good texture (important to me) and lots of flavor. Definitely making this one again. Gonna surprise my non-vegan friends with it. They may not be fooled but I know they'll love it. Will keep you posted.

I'm so glad you enjoyed it, Fran!

If you share it with friends, I'd love to know what they think

You had me at Subway Tuna - it used to be my jam too, back when I could eat bread! Now I'm in early pregnancy missing tuna/spicy tuna so much I could cry! Enter this recipe - try it with some avocado (and I just have to add hot sauce too). Life changing! I think I will do some up in a lettuce wrap or on top of a romaine salad for lunch this week (all with avocado of course, my second must-have food). It was super quick to make too. Thank you for this recipe, you have already made the next 7 months of my life easier!

Lol you are too cute!! Good luck with your pregnancy! I'm glad to know I can help with some of your cravings, Danika :) :)

Eewww tastes like chunky matter of cashews and brags aminos, not tuna, Use much less than what's recommended here. So I'm going to add curry and paprika see where that takes me. Btw does she state when we soak nuts or de we always soak nuts? it be nice to be more clear can anyone tell me?

Ha - I'm sorry that you didn't like this one, Aslana!

It's not necessary to soak the nuts in any of my recipes, unless it's specifically stated.

This tuna is really delicious!! I didn't have any soy sauce so I used 1/2 tsp of Apple cider vinegar and processed a raw nori sheet in the batch. So yummy!! Thanks Laura Jane! I get to have tuna again!

That was very ingenious of you, Kymm!! Nice subs :) You are one smart cookie.

I'm so glad you enjoyed this one, Mary! It really satisfies an old-school craving for tuna salad :)

What could i substitue for walnuts? I'm allergic.
Ps: I just had your quick cacao fudge, it was delicious!

I made it with coconut aminos instead of Bragg's and it was perfection!

Thanks for sharing that, Robin. I'm glad you loved this! :)

Thank you! This is a great substitution! I am not a raw food person, although I eat raw foods regularly as a healthy part of my diet. With Fukushima, I was devastated about giving up tuna as they migrate through the radiated water. I gave this a try adding chopped celery, red onion and cucumber to the mix and then served it on spinach and chopped tomato salad. My husband devoured it! My kids thought it was ok, so I made it again without the onion and reduced the Bragg's and they thought it was pretty good too!

Hi Audrey! Whatever it takes to get the kids to enjoy along with you! That's great!

This was amazing! I too used to crave tuna fish (truly the only non-vegan thing I wanted after converting.) I haven't had real tuna in years so having this tonight made me feel very guilty because I couldn't tell a difference from when I used to eat it! I had mine on chopped iceberg lettuce, sliced moon red onions, chopped tomato and sprinkled with fresh basil. This was absolutely delicious!!

I loooove this recipe! I have been battling candida also so I use raw coconut aminos because it's soy free and has 65% less sodium than soy sauce. So yummy!

Didn't have any soy sauce so I used miso, still came out great. Next time I'm going to try adding dill, that sounds good.

Creative substitutions - thanks for sharing, LeahBelle!

This is so yummy!! As well as super easy to make! I love it! I added a tsp of dill and a clove of garlic too! So good! I love the lettuce wraps! A perfect crunch!

So glad you enjoyed, Hollie!