4
FAQ: You need to know this about vegan nutrition 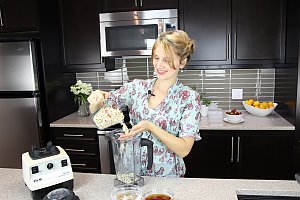 In this video, The Rawtarian shows you how to make raw vegan chocolate avocado mousse in your food processor.

And I am with you today to make raw chocolate mousse out of avocado, banana, and a variety of other raw ingredients.

So simple. We’re gonna take a food processor as opposed to a blender, and we are going to process all of these ingredients up and make a chocolate mousse.

For example, when you eat it, this is my secret garnish that you weren’t supposed to see yet, but you know when you kind of eat it and if you move the spoon into it, it’s going to almost stick straight.

So that is the idea of the refrigeration. So you don’t have to do it, but it is going to be more moussey if you do.

So all we’re gonna do is put everything into our food processor, starting with the banana.

But did you know—I haven’t brushed up on this lately but it’s a general concept that I’m familiar with—that the banana that we all eat and tend to know is called the Cavendish banana, and it’s just one of hundreds of different types of bananas. But it’s the one that seemed to be. It has been popular for a really long time, and that’s the one that’s grown everywhere.

And we’re actually quite susceptible to you know something could wipe out all of our banana production really quite easily because we’re all eating the same breed of banana.

Anyway, so we’re going to be putting our avocado. And this is quite a nice looking avocado. Quite ripe and soft. It’s actually really a nice avocado. And we’re just gonna pop this into the food processor.

And one of the things that I really like about this recipe is it is nut free, which is great because we have so many people with nut sensitivity. And sometimes, it can be, you know, you’re not allowed to bring nutty stuff to school or someone in your household. That did look a little dangerous. Oh dear.  So it is nice to have a nut free recipe.

And I do love a good chocolate mousse. And what I find with pretty much almost any chocolate recipe really, it really screams to be paired with some fruit, specifically berries. Berries and chocolate just go together so well.

I think we can just add everything in here. So that’s our 4 tablespoons of raw cacao.

And our coconut oil. Your coconut oil might be a little bit softer or clearer. That’s normal. The only difference between this hard stuff and the clear, translucent, oily stuff is the temperature. It just solidifies when it is cooler.

It’s a bit cooler in here today. I must admit, it is the depth of winter where I am living at the moment.

So that was our sweetener. The honey. And I won’t try to scoop out the salt with the honey because that would not work. Using my pinky. The hands, by far, are the most important tool in your kitchen.

So that’s all good there. Pardon me. So this should be pretty easy. You can’t really overprocess this one. It’s hard to screw this one up which is really nice. So it’s a great first recipe or something to encourage other people in your life to try.

So what we’re gonna do is process it up.

Let’s just interrupt it and take a peek. I’m gonna say it’s almost done. You probably can’t see much there. I do see a few little flecks of avocado, and we both know if we’re serving this raw chocolate mousse to a skeptic who’s not enthused about avocado in their chocolate, we don’t want them to see any so we’re gonna keep going.

I still see chunks. No chunks.

That’s looking beautiful to me. So let’s take a look at this. Love it.

You did see me lick the spoon, but I’m going to eat this all myself anyway. So let’s now worry about it.

So here we have the mousse. It tastes really good right now. It’s actually not too, too sweet. You could almost go with a little bit more sweetness for my palate. I like things really, really sweet.

And there you have your mousse. So like I said, you probably wanna refrigerate that. Tastes awesome.

And this is a crazy serrated knife, but we’re going with it. I probably wouldn’t actually garnish it until I was going to eat it, but there you have your raw chocolate mousse. Delish. Completely nut free. And so quick to make.

Thank you so much for joining me. Adieu.

Thank you so much for your kind words, Carol :) I get to have so much fun in the kitchen with you!

I love your recipes! Delicious, simple and healthy. I love your videos because you try to give us all the information to make your recipes successfully and most important you sincerely are trying to help others. You are sweet and share all you can. Thank you! I share your sight with everyone who comes to our home and enjoys your recipes. Namaste

I love your recipes! Delicious, simple and healthy. I love your videos because you try to give us all the information to make your recipes successfully and most important you sincerely are trying to help others. You are sweet and share all you can. Thank you! I share your sight with everyone who comes to our home and enjoys your recipes. Namaste

Thank you so much for your kind words, Carol :) I get to have so much fun in the kitchen with you!