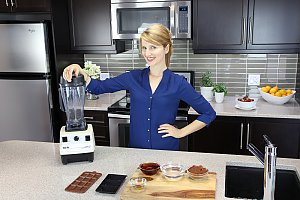 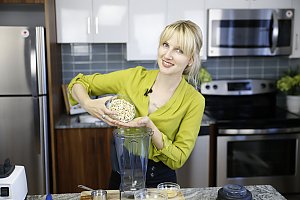 34 TRK Members-only items not shown. Join to unlock.
This video found in:

In this video, Laura-Jane The Rawtarian demonstrates how to make almond butter fudge squares.

There is no equipment required for this recipe! (Just stir and freeze.)

Hello! I am Laura-Jane, The Rawtarian. And today in The Rawtarian's Kitchen, we are making the most delicious almond butter fudge squares.

There are so many reasons why these are one of my favorite recipes. One, there is no equipment. All you need is a bowl and a whisk, or possibly a spoon if you don't even have a whisk. If you don't have a bowl, it is a big problem. You need to get a bowl.

You can make it. In my cookbook Cook Lively!, I have a recipe that takes forever to make your own almond butter, but you can also just buy it. I usually just buy it, but I have made it myself and it does work. Almond butter, 1 cup.

Also, this is a 1/4 cup of pure maple syrup. Or you could use honey or agave nectar or whatever you are doing for sweetness.

These are hemp seeds. They are optional.

You know, like those—ooh, these chocolate bars I used to love. Like the cookies and cream Cadbury. Ooh, those are good. That’s a good chocolate bar. But it's just to make some little crunch if you want it.

Let's just do this! Well, this is parchment paper, which is different from wax paper. It's made really for cooking. And I'm going to line the pan because it's just going to make it way easier to get the bars out. So I do recommend doing this.

We'll deal with that later. But basically, let's just do this.

Actually, I think I'm going to do this. Slidey. Little slidey slidey.

This is the—what is this? I don't know. Almond butter.

So yeah, really there's like no rules. All we're doing is throwing it all in here and just stirring.

I'm going to need a spoon.

But generally, I don't use peanut butter in any of my recipes, as you probably know.

So this is almond butter.

Conceivably, you could probably use cashew butter or any kind of nut butter really.

Coconut oil. Okay. Sometimes it doesn't matter if your coconut oil is hard and kind of chilled and white, but you want it to be liquid in this recipe. So if yours is like hard and chunky, just melt it. You could do that in the microwave or however you want to melt. And it doesn't take long. It's just like butter. It's solid or melted.

I think I'm going to hold off on those for a minute. So here we have everything, and we just need to get it together. Get it together, fudge!

Mm-hmm. So really you're just mixing it until it looks kind of like almond butter again, but now it's like sweet, delicious almond butter. So good.

I feel the need to tilt it to show you. That's pretty good.

You know, I am going to wish that I had my spatula somewhere around here, but we're not going to worry about it. So again, optional. Just for fun.

But hemp seeds, you know me. I kind of don't care about nutrition. All I care about is flavor. But they are actually one of the vegan sources of protein that you can get. And they're quite a neutral, kind of nutty, but neutral flavor.

See that now we have little chunks, which is good. But yeah, so it's nice when you can add hemp seeds to any recipe really because you're getting a good nutritional boost, and it doesn't change the flavor too much.

It's not like adding flax or something, which would taste terrible. Don't add flax to this.

So that is pretty much done. Now we're just going to go like this.

And the nice thing about this recipe too is it does need to be frozen to solidify, but it really doesn't take that long. Like maybe 90 minutes. Something like that.

It's worth it, though, with the parchment paper. Because when it's frozen, you'll be able to pop the whole bar out and then slice it really cleanly whereas if you don't use parchment paper, then you just have to like try to get in there with a knife. And it's super awkward.

You know me, though. I love any recipe that doesn't require any equipments. Awesome.

So you probably can't see this. I'll show this to you a little better.

Can you see it?

So you just want to spread it out.

But this is why the loaf pan is a good size for this particular recipe. Because if you use a huge pan, it's going to be too thin. Like the fudge will be kind of too thin. But using a loaf pan makes a nice thickness for fudge.

And I kind of want to make it a clean bar. Sorry, I keep crunching this parchment paper and then talking at the same time.

Oh, it smells so good.

So of course, we're going to freeze it. And then when you take it out of the freezer, you should eat it. You should not pack it in your child's lunch on a hot summer day because it will melt. It will come back into this texture, which would still taste delicious but would potentially be kind of messy.

So now what we're doing. I don't know why I got that last dollop. It’s the—You know, it's my nature.

Okay. So I want to show this to you.

Here it is. It's flat and kind of clean in there.

And now we're going to freeze it for like 90 minutes minimum. You can't overfreeze, so feel free to just pop it and then go like on a hike for a day or five days. That's fine! It could be frozen.

But generally in like 90 minutes, it should be pretty much hard enough to be able to slice it. So I'm going to pop that in the freezer and then we'll be back with you in a moment.

And we're back. It's probably about 2, 2 1/2 hours later. It's just been in a normal household freezer. I'm hoping that it's frozen.

Pretty good, considering it's only been like a couple hours.

So here it is in all its glory. It's going to melt pretty quick, so you want to move fast. So what I like to do is eat it.

But what I was going to say is make them into kind of like bite size morsels. And then I cut them all up.

I mean, you can do whatever you like. But they're pretty substantial, so you don't want to be like snacking on a huge bar like this because they are really protein rich and also pretty high in fat so you want to just be like—like what would be a perfect size in my opinion.

I hope you could see this because it's like almost the same color of the board here, but it's pretty much like bite size chunks like that. So what I normally do is just cut them up into little pieces. That’s tiny, but—You know?

And then I would just like put them in a big—today, I have plastic wrap, which you can do as well.

But usually I'll just put it in a Tupperware with a lid that I could just go in, take a piece, munch on it.

It's got to be kept in the freezer because it needs to be frozen. Otherwise…

Mmm. So fudgy. I would describe it totally as a fudge. It's really quite nice and sweet.

Nutty but sweet. It's like a sweet, delicious fudge.

Thank you so much for being here with me! Bye-bye.

Hi-love your informative site thank you. Just wondering is regular almond butter from the supermarket okay? Do I need to get special butter or does it not matter too much? Thank you

Hi-love your informative site thank you. Just wondering is regular almond butter from the supermarket okay? Do I need to get special butter or does it not matter too much? Thank you