A Community Recipe by Sweetpea 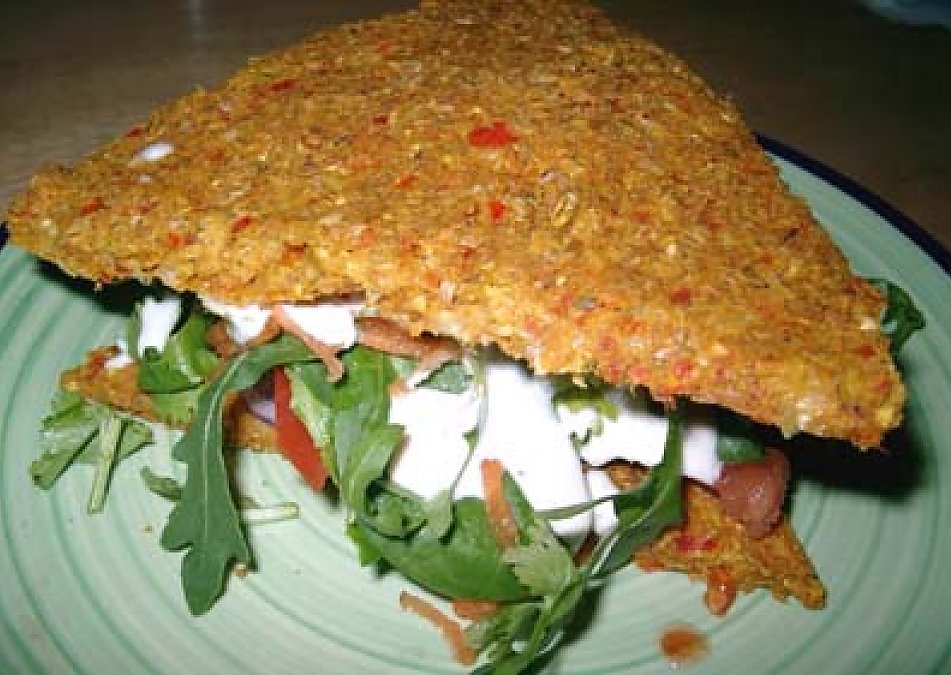 Click on photo above to open gallery
Beautiful golden cornbread sandwich. Filling and delicious. It was a beautiful raw experience biting into this sandwich!!
Add to your favorites
Found in:

1. Process all the ingredients in a food processor until you have a thick batter.

2. Transfer onto a teflex sheet and spread out into a large square with spatula or fork.

3. Dry at 145 Fahrenheit for about 1 hour, then flip over, turn heat down to 115 Fahrenheit, and continue drying for about another hour or two until soft but firm on the outside.

4. Cut into triangular pieces, trimming the edges if you’re serving to a friend!

5. Make a salad of the filling ingredients and add it to your sandwich.

5. Optional: Blend all the mayonnaise ingredients with enough water to make a thick smooth sauce.

6. Dribble cashew mayonnaise on top of the veggies before placing the corn bread lid on top.

It was a beautiful raw experience biting into this sandwich!!

This makes a lovely sandwich! I sliced up avocados, tomatoes, and some mesculin leaves and topped with the cashew mayo. This is very filling and delicious. It passed the 'picky husband' test with flying colors. It's so hard to please my hubby with raw food and he absolutely loved this sandwich. The bread was enough for 3 decent sized sandwiches and I made him a third sandwich for lunch the following day. He was a happy man!

Hi natnode, that is such a scrummy way to eat it.

I actually used corn as a way of using it up, plus it makes a nice golden coloured bread. However, you could try making it using butternut squash or zucchini.

I'm so glad there is a bread recipe that's not full of nuts! Looks delicious and I can't wait to make it! Thanks!

This makes a lovely sandwich! I sliced up avocados, tomatoes, and some mesculin leaves and topped with the cashew mayo. This is very filling and delicious. It passed the 'picky husband' test with flying colors. It's so hard to please my hubby with raw food and he absolutely loved this sandwich. The bread was enough for 3 decent sized sandwiches and I made him a third sandwich for lunch the following day. He was a happy man!

D-lish!! Thanks for the recipe.

Sounds so yummy. First I need to buy a new food processor and learn how to use my dehydrator.

Thanks Cherie, and yes I have another book coming out shortly 'Raw Menu' a 7 day raw menu plan.

Okay, just made payment. Can't wait to get the book. I hope you do more. That sweet bread you just posted is calling to my apricots and carrot apple pulp!

Hi Cherie, you can make payment now and I'll forward your book to you shortly afterwards.

Hi cherie, sorry about that, I'm just waiting for bank confirmation. Should be good to go middle of next week. Or, if you want the book now, send me a private message at

http://www.therawtarian.com/user/9864 and I can give you an alternate email address and send the book manually. Apologies once again.

Hi natnode, that is such a scrummy way to eat it.

This bread rocks!! I made it last night and just finished pigging out on it for lunch. I played "four square" with it and had four open faced sandwiches with differnt toppings. Thanks for a delicious and easy recipe!

Thanks Fee, I'm glad you enjoyed it, it is my pleasure to share my recipes.

Rawafromama, If you don't want to use flax, I would suggest ground sesame seeds or buckwheaties ground into a flour.

Wow! This was great. I made half the quantity and spread it out to about 8 inches by 6 inches and dehydrated for about 4 hours. I cut it into 4 rectangles and 2 are still dehydrating. The other two I had as open sandwiches topped with guacamole, grated carrot and walnuts. I served it with coleslaw (from Shazzies detox delights) courgette (zuccini) crisps and celery. Delicious. Im hoping to dry the other pieces out further for my lunch tomorrow. Three cheers to sweetpea. Hip Hip Hooray!

I go by what they do at the tree of life center where they studied the excalibur and the effect of drying at low temperatures over a long period of time. Dr Gabriel Cousens and his staff use this high temperature way of drying food for a short period before the dryer heats up.

I would never dehydrate at 145, regardless of what temp the food is at the beginning, simply because I don't find it necessary, and I'd certainly forget to turn it down after the first hour. 105 is the temp used by most raw cooks for bread - bacteria growth isn't an issue at this temp. This delicious bread will be fine dehydrated at 105, for just a little longer, as I have made many similar breads.

Here's a recent piece by Russell James, one of the greatest raw chefs in the world.

In issue 1 of this eZine, a reader sent in a question asking about the growing trend of starting with a dehydrator temp of 145 degrees F and then turning it down after a couple of hours.

'...I also stated that using a higher temp during the drying process will help to prevent the growth of unwanted microbes, this was information I had picked up from other, well-established, raw food teachers. This may also have been misleading, so I would like to state, at this point, that I have never, and would never, use a temp as high as 145 degrees F during the drying process.

Excalibur do also state that the dehydrator dial can be turned up higher for the first couple of hours, as the food doesn't reach that temperature in the early stages. The reason most people don't do this is because they don't want to have to think about adjusting it once it has started to dehydrate. If you're in a more commercial environment (where time is more of an issue) your situation may be more suited to starting off higher, and then turning it down.

If this is the case, you may want to invest in a small probe thermometer that directly measures food temperature (as I have done), that beeps when a preset temp is reached, therefore allowing you to be sure the food stays under the critical temp of 118 degrees F (or 120 degrees F, depending on who you listen to).

But to be honest, let's keep things simple; if you're not in a hurry to get things dehydrated then just set the dial to 105 degrees F at the start and leave it there. I hope that makes things clearer, thanks to Debbie for her help in this matter.'

I actually used corn as a way of using it up, plus it makes a nice golden coloured bread. However, you could try making it using butternut squash or zucchini.

3relefords - you can use parchment paper (not wax paper). It might stick to it a little, but a lot of people use it (found near wax paper/saran wrap in the grocery store). You could put a touch of coconut oil or olive oil on the paper if you watned, but not necessary. Also, you really could just put it on a plate and stick it in your dehydrator if you wanted...the air doesn't go "through" teflex sheets, just around it, so a flat plate would be fine too, then when you flip it, flip it onto the mesh sheets in your dehydrator.

What do you do when corn is out of season? (aside from not making it) I have use frozen corn for other recipes, much to my despair, but at least I get more variety.

Don't have a teflex sheet with my dehydrator-any suggestions? I would love to make this-it looks devine

the temp of the food remains lower than the air temp. check out the excalibur website. Drying foods at too low temps encourages bacteria growth/spoiled food.

Thanks Sweetpea. That answers questions about other recipes too. Oooooohhh, I can't wait to try it.