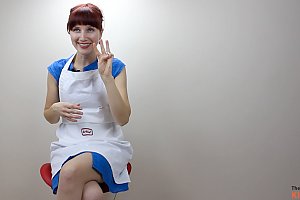 In this video, Laura-Jane The Rawtarian demonstrates how to make "The Rawtarian's Raw Breakfast Bowl."

Full recipe and written instructions on how to make this here: http://www.therawtarian.com/rawtarians-raw-breakfast-bowl

I eat this recipe and green smoothies almost exclusively in the morning when I've got to run out the door.

This is Laura-Jane The Rawtarian from therawtarian.com, introducing you to my absolute favorite breakfast. I’ve got it in my website. I think it’s called The Rawtarian’s Raw Breakfast. I just kind of came up with it on the fly, and I’m enjoying it practically all the time. It’s pretty quick and it’s really delicious. I’ve got a lot of ingredients here, I’ll go over them all, but the key ingredients what you need to make The Rawtarian’s Raw Breakfast. A shredded apple. Sounds complicated. It’s not. I’ll show you. But really, the shredded apple. I’m going to say you need chia seeds. Other than that, I think you can substitute if you need to. Plus, I’d say some kind of sweet dried fruit. Here, I’ve just got raisins.

So what we do here—I’ll talk first about the final product actually. Really, you’re having a nice, fluffy breakfast cereal with cashew milk but I’ve frequently topped it with water if I’m too lazy or don’t have cashew milk. So really what you have is a breakfast cereal that’s a bit of a hybrid between a porridge texture and a hard cereal texture, but the reason the shredded apple is so important is it really doesn’t taste like apple anymore. It takes on a really nice texture that kind of really gives a great base for those recipes. So there’s no prep work involved. All we’re going to be doing is shredding the apple, combining everything in the bowl, and eating it.

I’m just going to finish shredding this. This is a mandolin slicer. You could use a cheese grater or whatever. It has different blades but right now I just got a typical cheese grater slice there. Usually, I do the apple first. It’s definitely the most annoying part but even if I’m in a rush in the morning, I do make this recipe. Now if you’ve got 18 kids and you’re shredding an apple for each one, god bless ya. But, you know, for myself or whatever a couple of people on the weekend as a treat, I’ll have my mom and niece over and I know I gave my mom this and she really enjoyed it and she was requesting it. So I’m going to finish shredding up this apple, and we’ve got our shredded apple. So you could chop it but it’s really not the same. So yeah, shredded apple. I’m just going to wash my hands. Bear with me.

And now we’re into assembling. So I got buckwheat growths. Not mandatory. Really, all we’re doing—actually, I’m going to start kind of the must haves. I got one apple. This is a granny smith. I like to use a firm apple. I don’t really like soft apples. So I’m going to say 1 ½ tablespoons chia seeds. Why would our be crucial for this recipe is that chia seeds actually expand kind of like a tapioca and get to be 10x their size. They’re going to soak up the milk and really change the texture of the recipe. Your dried fruit is going to give it its sweetness. This is raisins. You could use chopped prunes. You could use dates. I have used bananas like real bananas and they didn’t work very well. It just didn’t taste the same. So then like I’ve mentioned before, I have used milk—I mean I have used water instead of milk and that works fine too. This is almond milk that I just made and I just keep this in the fridge like the regular milk. So this is going to be okay in the sense of—first of all, it’s not going to have any nice spice. Gonna add cinnamon. I wouldn’t really can’t think of anything else. I always use cinnamon in a breakfast cereal. It’s just what I use but I’m stirring this up and as you can see, it’s not too wet and as it sits and intermingles with the chia seeds, it’s almost going to dry up not completely but it’s going to soak in those chia seeds. So even this just as it is, if maybe you let it sit for a minute or two, it’s going to be really nice. Like look at that. It’s a really nice texture to eat and that’s the shredded apple that’s kind of what most of this is and it’s so key, but something that I love and quite a bit of it in this recipe is probably—this is dried, shredded coconut. Again, I actually really like this in this recipe and I always add coconut but if you didn’t, it would be okay but it definitely tastes better. Again, you could eat this just as it is but I do love these buckwheat growths because they’re very crunchy and it gives it a really nice crunch. This is quite soft, the texture. And as you can see, you can’t really see much cashew milk in there yet. I would probably add a little bit more. I always like my breakfast cereal to be really swimming in milk. Oh dear. And again, I’ve used water. It’s better with almond milk. Do I keep saying cashew milk? This is almond milk but you can use cashew milk too. And now the buckwheat growths. They’re super crunchy and they’re just there for texture so you don’t need them at all but this is kind of my regular routine. These ingredients. And then it’s ready to go. I didn’t put much cinnamon. I would say you’re right in putting ½ a teaspoon. I’m kind of doing it by eye but cinnamon is delicious. So there you go. And the cashew milk, it’s really by eye. This is the final texture that I like. A little bit of wetness but not too much so probably—that was full so that might have been a 1/3 of a cup.

So that’s The Rawtarian’s Raw Breakfast. I have this about maybe lately 3 times a week in the morning. It’s definitely quicker to make than a green smoothie even with this if you’re making for one person. I would think I’d share that I do often add as well is for texture is a few almonds and sometimes a few pumpkin seeds too. That just gives it even more crunch. I hope you enjoyed this. I really love this recipe. It’s really easy and I do love the texture. Would you like to see me take a final bite? It’s really good. Umm, here it is. Everybody says oh, it’s so delicious when they do this, and it is. And basically, that’s it. I hope you enjoyed this recipe. I have many recipes like this one that are simple and raw of course at therawtarian.com. If you’re there, you can sign up for my newsletter which has a pdf when you sign up, and it has a lot of raw articles presented. I know I’m not supposed to talk with my mouth full, but I am, and thank you so much for joining me.

Yum! It looks so delectable! About buckwheat groats, don't these have to soaked? And where can I purchase them? I don't like chia pudding, but the combination of ingredients makes my mouth water!

This also makes a really nice late night dish. I add one diced banana and some blueberries! Don´t have to wake up hungry in the middle of the night.