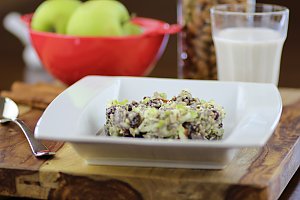 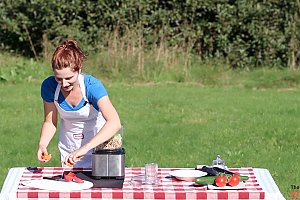 In this video, The Rawtarian shows you how to make raw taco filling from walnuts and sun-dried tomatoes.

Full recipe and written instructions on how to make this here: https://www.therawtarian.com/raw-taco-meat-recipe

This is a six-minute tutorial showing you how to make raw taco filling from walnuts, sun-dried tomatoes and a full other ingredients. A food processor is required for this recipe.

I’m Laura-Jane from therawtarian.com and today, in my kitchen, we’re actually in my outdoor kitchen which is on my 60 acre farm, and we’re just going to be making a really simple raw vegan nut pate that I like to call raw taco meat. And it’s essentially something that’s very hardy and it’s really great to use in a raw wrap like a lettuce wrap or on top of a salad. It’s very satiating and nice and it’s just a great, little recipe.

So what we have today, as of course, it’s all raw and vegan recipe. Ingredients rather. So what we’re going to be doing is taking all of the ingredients, pulsing them into the food processor, and then we’re basically done.

So what we have here is 1 cup of walnuts. And if you don’t have walnuts, you can use pecans instead. We have approximately 1/3 of a cup, 1/3 to ½ of a cup of sundried tomatoes. Now these are awesome. They’ve been sundried and soaked in oil which is the ideal situation. So you want to use soaked sundried tomatoes. And then we have an additional 1 to 2 tablespoons of extra virgin cold pressed olive oil. Then we have ½ a teaspoon of Celtic sea salt.

And for seasonings, to give it a taco spice, we have 1 tablespoon of chili powder and a 1/8 of a teaspoon of cayenne powder. So the cayenne powder is very spicy so if you don’t have it, you can just leave it out or if you don’t like spice, you can leave it out. But really, what we want to have at least is 1 tablespoon of chili powder which gives it that nice taco flavor without any spice like spicy spice, if you know what I mean.

So basically, what I’m going to be doing here is just popping everything into the food processor. So my 1 cup of walnuts or pecans. Generally, I like pecans better than walnuts but in this recipe, I find that walnuts work great and usually they’re less expensive than pecans.

So here you can probably take a look here at the sundried tomatoes. There’s some oil that’s coming off of them, and they are chopped. And if your sundried tomatoes are not soaked in oil, you’ll want to soak them in few hours first before making this recipe just to soften them up which is very important. So our 1 to 2 tablespoons of olive oil. So I always use Celtic sea salt. That’s better than the table salt that we’re used to. I’m not—I don’t do things for silly reasons. I do things for practical reasons so actually now I’ve started using Celtic sea salt. And when I taste table salt now, it’s not because I’m high and mighty, I just think that it actually tastes really weird and gross so I always use sea salt.

Here, we have our chili powder. Our 1 tablespoon. And I actually don’t like things very spicy so I have 1/8 of a teaspoon here of the cayenne and that’s very subtle so you practically won’t find it too spicy for sure because I’m not a big spicy girl.

Now, I’m doing this upside down here. This could be crazy. Oh my lord. Yes. Come on, my friend. What’s going on here? Is just for you. Yes.

Thanks to the magic of television, we are back and the lid is now on. What I wanted to say just for the sake of this video, I got a new food processor because it’s so clean and shiny so I’m just getting used to it. So I got everything in there. All we’re going to be doing is processing all the food up and now what I’m going to do here is process, and then I’m going to pause and then let you look inside and let you see how it looks because processing is a bit of an art. And you don’t want to overprocess and you don’t want to underprocess so let’s just start by pulsing.

Oh god, now I have to take this thing on and off. Now remember, Laura-Jane, like this.  Okay. As you can see here, I hope you can see this, we’ve got it quite chunky which is great. Do I have a spoon? Let’s use this. So it’s quite chunky. It’s actually pretty good because you want it to be chunky. You kind of want it to mimic the walnuts into ground beef size. I know that sounds gross to some but that’s kind of what we’re doing here is making taco meat. Okay. Yay. Okay. So we’re just going to go a little more pulsing.

And I actually, I would almost say it has not changed very much. I would say it’s looking good. Okay, can we remove this? Yes. Okay. So all I’m gonna do here is show you what it looks like. And there you have it. Raw taco meat.

I'm making this tonight! Looks simple and yummy. I've made a different recipe similar to this before but the walnuts required soaking.

Yes it was quick and yummy and I still have some left for tomorrow! My husband (complete carnivore!)loved it too :-). Going for the egg salad tomorrow night as I need to make more sun dried tomatoes. Its all actually a lot let fuss and quicker than 'cooking'. From reading your story, I think I had similar reasons to you for going raw. My vegetarian diet was growing stale after 20 years and definitely in need of a reboot. Its time to let go of the bad habits!

I'm making this tonight! Looks simple and yummy. I've made a different recipe similar to this before but the walnuts required soaking.

Yes it was quick and yummy and I still have some left for tomorrow! My husband (complete carnivore!)loved it too :-). Going for the egg salad tomorrow night as I need to make more sun dried tomatoes. Its all actually a lot let fuss and quicker than 'cooking'. From reading your story, I think I had similar reasons to you for going raw. My vegetarian diet was growing stale after 20 years and definitely in need of a reboot. Its time to let go of the bad habits!

Glad your carny loved it :)