A Community Recipe by RawNibbler 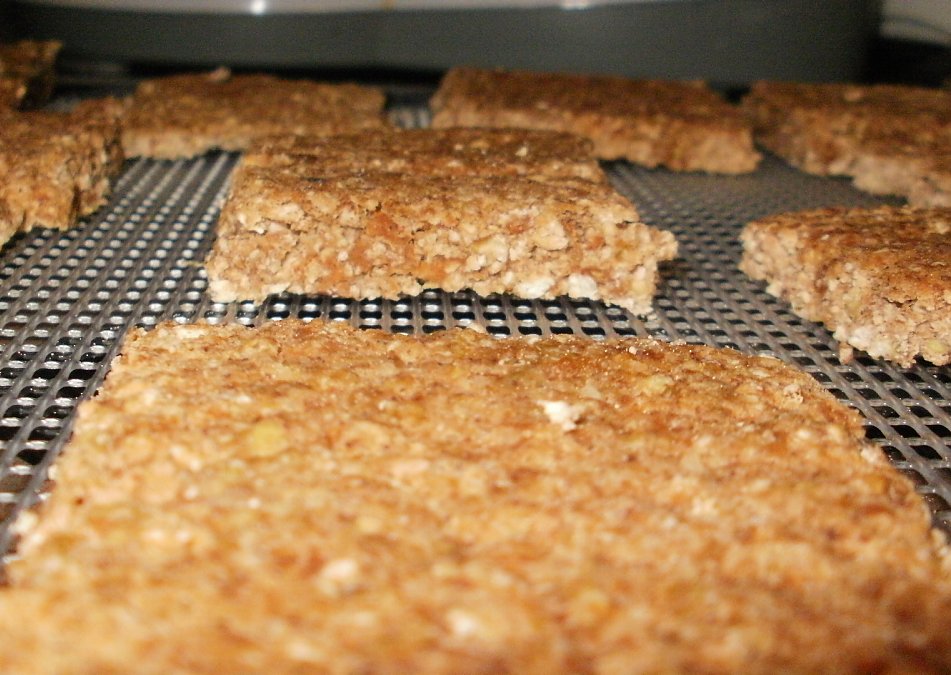 Click on photo above to open gallery
This was a lovely mistake. I was attempting to make apple cinnamon grawnola. I'm so used to making grawnola with dehydrated buckwheat groats (simply adding fruit and syrup to the dry groats then dehydrating), but this recipe called for soaked buckwheat groats. I misread the recipe and didn't realize that the syrup...
Add to your favorites
Found in:

1. Blend the apple, agave, dates, cinnamon, water, and vanilla until everything is well-blended and there are no lumps.

2. In a processor, add the blended syrup, buckwheat, flax mixture, and almonds. Process until everything is thoroughly mixed.

3. Using teflex or parchment/wax paper, spread mixture evenly onto trays. The thicker the spread, the longer it will take to dehydrate.

4. I dehydrated on 110 Fahrenheit but 105 Fahrenheit is fine. (Be careful not to make the ends thin, because it will dry faster and even crack.)

5. I would score after about 16 hrs (or more for those using 105 degrees), flip over, and dehydrate for 2 or more hours until dry.

This was a lovely mistake. I was attempting to make apple cinnamon grawnola.

I misread the recipe and didn't realize that the syrup was to be added to the soaked groats--not processed along with it!

The texture is soft like bread, similar to Ezekiel bread.

This was a big hit at our house. Thanks for the recipe!

This sounds like, as you said, a wonderful mistake. Looking forward to trying it. Might even get it into the dehydrator today!

Thanks 4 the buckwheat info. I will have to do online - no whole foods or such in my neck of the woods. Does the kind of apple make a difference?

This was a big hit at our house. Thanks for the recipe!

I'm sure it would work out fine :)

You could make it totally raw by using a date syrup instead of the agave, and maybe sesame seeds or sunflower seeds instead of the almonds (which are nearly impossible to find raw these days).

I'm planning on trying this one sometime soon, because I love apples and cinnamon!

Cherie03, no the type really doesn't matter, but fiji apples are the sweetest

Thanks 4 the buckwheat info. I will have to do online - no whole foods or such in my neck of the woods. Does the kind of apple make a difference?

Cherie03, I got my buckwheat from Wholefoods in Birmingham, AL but sometimes I buy it from Manna Grocery in Tuscaloosa, AL, but more often I buy it from www.iherb.com when I order my monthly shipment. I love their prices, but the buckwheat is heavy so the shipping is higher. The shipping is more than fair (giovanni conditioner is less than $7.30 which includes shipping). I hope this helps.

where do you get your buckwheat and what kind of apples did you use?

Thank you so much hipnotizer! What I like most about the apple-cinna toast is the chewiness- very similar to wheat. I hope you like that bacon as well.

Just put them in the dehydrator! Now just 15-16 hours until I can eat them! I saw your recipe for bacon and will have to try that as well! Thanks for the wonderful receipes. Keep em coming.

Awww that's so sweet! lol You'll like it. If you don't eat PB and J then You can still have an AB (almond butter) and J (berry puree) or whatever else you want to eat with it. I hope you like it as well.

Oh I recently got an email about my eggplant bacon. You may like that as well. It's so yummy :) Thank so much for the great reviews

I love wonderful, tasty mistakes, I will be making your mistake tomorrow and I must say that it is one mistake I am looking forward to!

My mommy used to say the same thing about me! That I was the most wonderful mistake that she has ever made!

Great sv3!!! I think they were also great with nut butter and raw jam (smashed strawberries/blueberries with a little agave or honey)

Just finished making a batch of these and as expected, they're lovely.

This sounds like, as you said, a wonderful mistake. Looking forward to trying it. Might even get it into the dehydrator today!

You know what SV3 I would recommend adding raisins as well.

This looks perfect - will def be the next thing I make in my dehydrator!