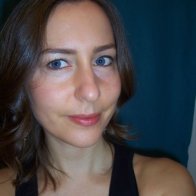 I’m a 31-year-old wife and mom who enjoys making raw creations and sharing them with others. I’ve been a member of this site for a year now, and I’m finally letting the rest of the raw community know a little bit about myself.

I first became interested in raw food when I saw Juliano on television about 6 or 7 years again. I was amazed at how he was about to make everyday American fare, such as pizza, burgers and burritos, out of raw fruits, veggies, nuts, seeds, sprouted grains and spices. So, I immediately ran out and dropped $30 on his beautiful book.

Unfortunately, it was a little overwhelming at first. His list of ingredients were quite lengthy, and I lacked the fancy gadgetry. As a result, I only succeeded in making a few raw dishes, and then the book was set aside to collect dust for a few years.

About a year and a half ago, I was somehow inspired to give it another try. I found some simpler recipes and gradually worked up to the more complicated ones in Juliano’s book. I’ve even started creating my own.

I am so happy to have found this site to give me inspiration, add to my raw recipe collection and find others who also live a raw lifestyle.